From Maui to Goma

Less than a month after returning from ten marvelous days in Wailea, Maui, I arrived in Goma. Six weeks in various provinces of Maniema led me to make a few comparisons.

Compare: Wailea, Maui, September 2009.
Our Hawaiian abode is a rented ocean front Condo in a gated community with a breathtaking view of the Pacific Ocean. Palm trees sway in the breeze, parents relax in lounging chairs around the pool as their children splash about, their excited and happy voices filling the air.

Outside the gates, palm-lined boulevards lead to upscale shopping centers, golf courses, expensive hotels and restaurants where native Hawaiians serenade the diners on the torch-lit lanai with the deep, hollow tones of their pink conch shells. Rented SUV’s, convertibles, and sedans speed along the highway, carrying happy vacationers to their pleasure filled destinations-- golf courses, hotels, restaurants and beaches. Barefoot children frolic and play on the beaches and grassy beach front lawns of hotels and condominium complexes. Lava from the now extinct volcano, Mauna Kahalawai, created this part of West Maui. The crater is a popular tourist site where you can view the sunrise and then coast on bicycles at breakneck speeds down the excellent highway to the mountain’s foot.

The days and nights are carefree for us as we vacation in the shadow of harmless Mauna Kahalawai.

Contrast: Goma, capital of North Kivu Province, Democratic Republic of Congo, 6 weeks in October & November 2009.
Kerry’s temporary home is a room at MAJI, a large home and hostel for Heal Africa and other volunteers, located behind an iron gate and lava rock wall on the shores of Lake Kivu. A double door opens onto on large flower garden, just beyond which is the Lake. Maji is an oasis, where volunteers can have a respite from the chaos of hunger, poverty, death and suffering just outside the walls.

Outside the gate, a road of broken pavement and huge pot holes leads to central Goma. The road is lined with walls and gates behind which are lake front mansions of the wealthy few and NGO’s here to help alleviate poverty and suffering. Entering Goma, the road is lined by shops and services in ramshackle structures erected on lava that covered one third of Goma from the eruption of Mt. Nyiragongo in 2002. Two story buildings that did not burn are now one story, lava having filled the lower level, and second story windows having been converted to doors. Barefoot children run and play on the rough lava rock, their feet
seemingly impervious to the jagged lava surfaces.

A few kilometers away, Mt. Nyiragongo looms and unceasingly bellows gases and steam. There is a road to the volcano, but it is not a safe place to visit. Rebels have set up a campsite at the foot of the mountain. Mt. Nyiragongo is to be feared. Its destructive forces wrecked havoc seven years ago and made 120,000 people homeless. The rebels are to be feared; rumors abound that the fighting is about to resume. 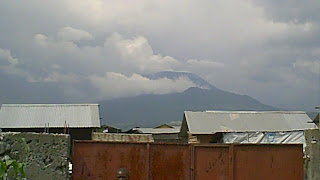 Nyiragongo’s daytime gassing and nighttime glow are constant reminders of the formidable and dangerous potential of this part of the world.

Compare: Wailea, Maui, September 2009.
Kerry and Spenser get up early to play golf at the Wailea Emerald Golf Course. Two hundred fifty dollars buys them green fees, access to the driving range, an electric cart, and four and one-half hours of fun on the broad green fairways and breathtaking views of the ocean framed by wind-bent palms. The course is busy with couples, families, and two-somes of buddies—in their quest for pars and birdies. The fairways and greens are built with layers of soil laid over lava. Historic lava walls, erected ages ago by native Hawaiians, remain here and there on the course, hazards in golfing terms, history in archeological terms. The lava is a hazard, but only for errant shots.

The days and nights are carefree for us as we vacation in the shadow of harmless Mauna Kahalawai.

Contrast: Goma, capital of North Kivu Province, Democratic Republic of Congo, October 2009.
Kerry takes an afternoon to visit CAMME (Centre de Aide en Faveur des Mineurs Mal Exploites, Center of Aid in Favor of Badly Exploited Minors) on the outskirts of Goma. There are an estimated several thousand homeless kids in Goma. Many are orphans whose parents were killed during the recurrent wars. Others are HIV/AIDS orphans, and still others abandoned or exiled from home and community for some offense or accusation.

CAMME takes some of these kids off the streets and fields of lava rock and offers them a future. Here they can learn sewing, carpentry, auto mechanics and eventually have a place to sleep at night, once CAMME raises funds to buy beds and bedding for the still unfurnished upstairs of their rented house. Camme serves nearly three hundred children, and is able to give them one meal a day, the only meal they may receive.

CAMME is an option to live other than by theft, which was the only way to survive for some of these kids. Two hundred fifty dollars will feed these kids for a month.

In the distance, Mt. Nyiragongo’s daytime gassing and nighttime glow are constant reminders of the formidable and dangerous potential of this part of the world.

Oakland, California, December, 2009.
Looking back on the year, I realize once again just how full life is of contradictions and contrasts. We know that we must never become blasé about how fortunate we are. Nor can we ever ignore the call for help from those whose lives are a constant struggle for survival.
Posted by blogsome at 9:42 AM