Recently I returned to rural Mississippi to express a long overdue thank you to Clarence Hall, a Black Mississippi farmer and civil rights leader in Sharkey and Issaquena counties.  Unlike most of the Black farmers in the Delta counties, Clarence was one of the few Blacks who owned his own farm. The vast majority of Black farmers were sharecroppers on white owned plantations who risked eviction if they registered to vote or became active in the civil rights movement.  Most were so in debt to the plantation store that if they attempted to leave they would be arrested. Sharecroppers lived a life not unlike that of slaves in the old South.  As a land owner, Clarence could stick his neck out and fight for racial justice without risking all his income; he just risked his neck. 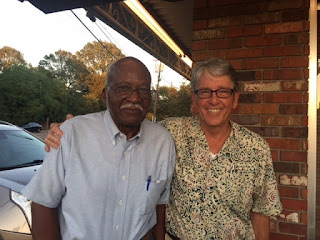 During the summer of 1965 Clarence and his wife Millie hosted my wife Judy and me in their home next to the Mississippi river.  I was in Mississippi to work with the NAACP Legal Defense Fund on a school desegregation project. Judy conducted a freedom school in the Hall’s back yard, preparing children to enter the soon to be desegregated grades one through three of the white schools.  The Halls courageously welcomed two white “trouble-making commies,” as the FBI regarded us, to their home for the summer.  We lived with them while we encouraged Black parents to send their kids to the white schools pursuant to the freedom of choice court order. The Halls made us family, insisting that we have their children’s bedroom. Ann, age 6 and Clarence III, 8, voiced no objection to surrendering their room and sleeping in the living room. Rather it was an adventure to have a young white couple joining the family for the summer.

Clarence encouraged me daily in the difficult task of persuading black parents to enroll their precious little children in the white schools. They expressed fear for the safety of their children in the hostile environment of the white schools.  Even if the children were not emotionally or physically harmed, the parents feared for their own welfare.  They knew they would suffer certain retaliation, dismissal from their jobs or awakening in the middle of the night to the screech of the tires of a fleeing pickup and the dancing glare of a cross burning in the yard. Clarence had already lost his job because of his civil rights activity, the Ku Klux Klan burned his church while we were living with him and after school registration, the Klan burned crosses in the yards of parents who had enrolled their children in the white school.

Over the summer, the Goughs and the Halls became family. On Sundays Millie slaughtered a chicken and the six of us sat around the table enjoying the best fried chicken I have ever had and discussing the progress, or lack thereof, in persuading parents to send their first, second and third graders into the unwelcoming environment of the white schools.   Within the walls of the Halls’ home, however, race was never an issue. It was amazing how quickly I became both physically and emotionally integrated with the Halls and the black community.  The Halls opened their hearts and home, impoverished sharecropper blacks invited me into their dark and sweltering plantation shanties and pastors opened their churches for community meetings to explain the court desegregation order. By the grace of God, Clarence’s guidance and the warmth that greeted me as I met black moms and dads throughout the Delta, my consciousness of being white faded away. Race did not matter. I often returned after meetings with parents discouraged and frustrated. I had explained all the advantages of the white schools over the dilapidated, ill equipped and under funded black schools, but I could not promise safety for the children or the parents.  Clarence patiently educated me about the reality of life for Blacks in rural Mississippi and encouraged me to persist, notwithstanding the lack of significant progress. I persisted and by the end of summer progress had been made.

As a result of my summer in Glen Allan and Clarence's friendship my life was changed. Just four years later my heart and mind were open to the adoption of Sheila and Jeffrey, six year old black fraternal twins.  But for that summer and my love for Clarence and Millie and their children and their love for Judy and me, the enriching adventure of the adoption never would have happened.  Not having adopted Sheila and Jeff would have been a terrible loss. I am forever indebted to the Halls for adopting me as family that summer, an act of love and grace that led to adding Sheila and Jeff to our family.

In 2015, the 50th anniversary of that life-changing summer, my conscience began to nag me. “It is time to go back, time to go back, time to return and reconnect before it is too late.” I pretty much quashed those thoughts, thinking, “It’s been so long, Mississippi is so far away; Clarence is in his mid-nineties now; our stay there probably is ancient and forgotten history.”  However, I could not suppress the realization that Clarence was in his nineties. That knowledge hammered me with the truth that indeed time was running out. Some months earlier I had telephoned Clarence and learned that his wife Millie and his son, Clarence Hall III had died   I had just turned 80. Who knew how much time remained for me?  I could wait no longer.  It was time to thank Clarence for enriching my life.

The opportunity to reconnect and give thanks arose in early October when Leila and I were going to New Orleans for a business conference. I suggested to Leila that we go early, fly to Jackson, Mississippi, rent a car and drive to Glen Allan to visit Clarence before going to New Orleans.   Leila enthusiastically agreed. She was eager to see firsthand a part of my history that over the years I had written and talked about.

I expected that in the 52 years since I had been in Glen Allan things would have changed tremendously. Much had not.  Just as in 1965, the paved roads along white-owned fields ended and became rutted, chuck- holed narrow and dusty lanes where the black-owned fields began. Our tires kicked up a cloud of dust that could be seen for miles.  Clarence and his daughter Ann, who was six when I had last seen her and now is a grandmother, saw the dust cloud and knew it must be us—car traffic on these rutted roads was scant.  The dusty road ended at a cattle guard across which was a narrow dirt path leading to the top of the Mississippi River levee.  Siri’s GPS told us to cross a cattle guard and proceed up the levee.  I did not trust Siri and called Ann to redirect us. Ann was much better than Siri and soon we reached Clarence’s small white house near the levee.  It turned out that the levee route would have worked, at least if we’d had a four wheel drive SUV, but we were in a rented Prius, not designed for levee excursions.

Clarence and Ann greeted us with huge smiles and hugs. My heart was filled with joy.  This handsome man at ninety three stands as tall and solid as he did 52 years ago.  His mind is as keen and his passion for justice as strong as during the height of the Movement in the sixties. Once inside his home, my home the summer of 1965, I explored. The house had not changed, except that now there was running water, a dishwasher and indoor bathroom and a shelf in the living room on which sat a dozen or more plaques and awards honoring Clarence for his work founding a credit union for Delta citizens. The dining room table was the same. A flood of memories of Sunday evening suppers swept over me. It was such a pleasure to reminisce with Clarence about our time together that long ago summer, although I must confess that our conversation was often marked by mutual interjections of, “I didn’t quite catch that, what was it you just said?” for we both suffer hearing loss.   Our conversation amused Ann and Leila, each of whom could not restrain herself from helping out with, “Kerry, he said…” or “Dad, Kerry said…”

We only had a few hours with Clarence and Ann. We spent some of that time driving to the nearest decent restaurant, about 30 miles away in Greenville. Ten of those miles were dusty, deep rutted routes through the cotton fields where cotton trucks had worn ruts so deep that I had to drive on the shoulder to avoid high centering the Prius. When we entered the packed restaurant a cheerful hostess greeted us. We were the only black and white diners. Clarence and Ann were the only blacks in the restaurant.  My apprehension quickly dissolved. The service was polite and efficient and no one paid any attention to us, blacks and whites dining together, an impossibility in 1965.

After dinner, we returned to the Hall’s place on the Mississippi. It was a pitch black, moonless night. Once at their home, I expressed some doubt about finding our way back to the highway. Clarence and Ann insisted on guiding us, sharing my fear, rightfully so, that Siri would leave us stranded somewhere in a cotton field.  We followed Clarence and Ann to the paved highway, headlights reflecting off the thick dust thrown up by Clarence’s pickup. He knew the road well and I, trusting his familiarity and driving recklessly fast to keep up with him, swerved and veered where he swerved and veered and somehow successfully avoided potholes and high-centering.  We safely reached the highway that would take us to our hotel in Vicksburg. Clarence pulled over, I pulled aside his pickup, our Prius and his pickup blocking both lanes of the road. I rolled down our window, Clarence rolled down his and Leila and I thanked Clarence and Ann for being our Moses and guiding us out of the cotton field wilderness.

I added, raising my voice hopefully loud enough that he could hear, “And thank you, Clarence, thank you for everything.”  Then a truck pulled up behind us, blocked from proceeding by our vehicles, stopping right on my bumper, obviously impatient to proceed. Leila and I shouted our goodbyes through the open window, waved and departed.

Unfortunately I hadn’t said everything I wanted to say. I should have said it at their house or in the restaurant, but the right moment never seemed to arise. My last chance was when we were parked side by side. But then the impatient truck arrived.  What I planned and failed to say was, “Thank you for that summer making me family, for giving me direction to my life and for reconnecting.”  I know, however, that if we had not been interrupted by the truck and had remained side by side for a few more moments on that gravel road in the dark of night, Clarence would have replied,

“Reconnect? Why Kerry, we never did disconnect.”

You can learn more about my civil rights work from Monterey to Mississippi by reading my book, Dear Jeff.  Available at Amazon. See also www.dearjeffbook,com )
If you do not want to receive these blogs, please email me at kerry6212@gmail.com and insert Unsubscribe in the subject line.