There are an estimated several thousand homeless kids in Goma. Many are orphans who lost their parents during the conflict over the past few years. Others are HIV/AIDS orphans, and still others abandoned or exiled from home and community for some offense or accusation, such as being a witch or sorcerer.

Pascal and his niece and nephew, Christine and Stewart, operate an organization, CAMME (Centre de Papua en Faveur des Mineurs Mal Exploites, Center of Aid in Favor of Badly Exploited Minors) with a facility on the edge of Goma for these street kids. Christine serves as the executive director of Camme. With funds from supporters in California, they have rented a large two story house with space on the first floor for offices and class rooms, and on the as yet unfinished second floor, a dormitory where 50 kids could sleep. There is no money to finish the upstairs, nor funds for beds, mattresses and bedding. The rent is paid until April.

During the day the children can learn sewing, carpentry photography and mechanics. Right now mechanical instruction is theoretical, since there are no funds available to buy an engine that can be torn down and rebuilt.

The only furniture is a small wooden desk and two chairs in Christine’s office. The boys are building benches, but the materials are extremely expensive. An 1 ¾ inch plank eight feet long costs ten dollars, and the nails and wood for the legs and braces add another $8, bringing the cost per bench to $18. When you consider that a monthly wage here for unskilled labor may be $20 or $30, you can see just how precious these benches are. I counted three completed benches, and three under construction. Several boys were busy measuring and sawing the planks under the direction of a young man. There is no money for more materials. 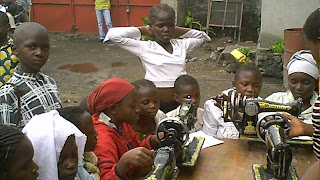 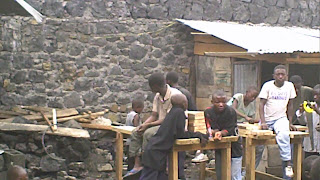 Camme serves nearly three hundred children, and is able to give them one meal a day. For some of them that is the only meal they may receive. The program gets the kids off the street and is an option other than living by theft, which was the only way to survive for some of these kids.

Camme is but one of numerous programs reaching out to kids in Goma. Unfortunately, there is little or no collaboration among NGO’s, FBO’s and CBO’s (Non Governmental Organizations, Faith Based Organizations and Community Based Organizations) with the same goals and target populations. Collaboration, it is feared, will lead to loss of control and perhaps jeopardize funding. So each goes its own way and people do benefit, but the inefficiency of it all is distressing. Yet they are at least partially filling the vacuum left by the utter absence of governmental services in this part of DRC.
Posted by blogsome at 11:29 PM