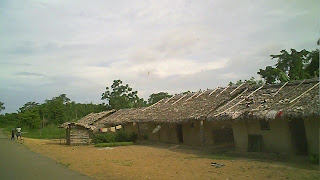 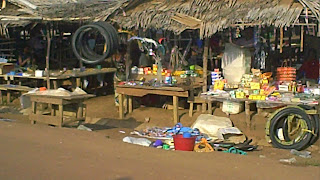 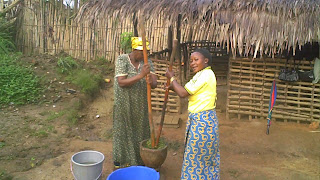 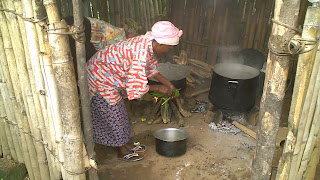 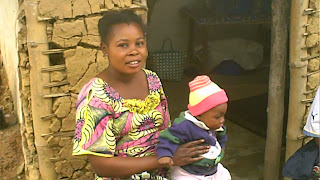 As mentioned in an earlier blog, I spent nearly a week in Lubutu, Maniema Province, with Richard Malengule as he presented the Gender and Justice sensitization course. Assuming I can successfully incorporate some photographs, this blog will be a bit of a photo tour of activity along the road from Kisangani to Lubutu and of some of the village residents and activity. There are also some photos of women, victims of sexual violence, working at the Heal Africa Wamama Simameni, Swahili for Women Stand Up. These are strong words for women who have endured a lifetime of submissive servitude to men. To stand together in the face of tradition and customs to stare down disapproving spouses and village chiefs is a monumental move by women.

Photos from top to bottom: Village beside the road from Kisangani to Lubutu; Lubutu market; Crushing Manioc; Kitchen at the safe house; Woman and child at safe house


The Heal Africa house in Lubutu has four sleeping rooms surrounding a large central room where meals are taken, work is done, and documents and some food stored. There is a bathroom with two compartments, one with a toilet, flushed with a bucket of water, and the other with a recessed shower pan. Of course there was no running water, and my showers were with water from a barrel of river water and a shallow bowl which served for rinsing body and hair by pouring water over my head. The toilet seat was broken, and had been deposited in the toilet’s water tank along with trash and scraps of toilet paper. However, the paper toilet seat covers fully covered the rim of the toilet bowl.

Even with the absence of a toilet seat, this toilet was far better than the squat toilet at the school where the seminar was held. It was in a little hut of woven sticks covered with a reddish clay, roofed with palm fronds. In the center of the hut there was a rectangular hole, about the size of a large brick. It was important to align one’s self carefully.

At the HA house, there was a large freezer, which did not freeze, but during the three or four hours that the portable generator ran, it kept things cool. Little plastic bags of water, holding perhaps the equivalent of a large glass-full, were kept there. In the morning they are taken to the gender and justice class for distribution with lunch during the noon break.

Just after the early light of dawn women and their children started arriving at the house. Some of them were part of the Wamama Simameni, some victims of rape and others who were associated with Heal Africa or the Wamama Simameni in some way. Usually three or four women went to the back yard, where a shed of woven sticks plastered with clay extended nearly the entire 40 feet width of the yard. Here two women crushed cassava in a wooden container as a goat grazed on grass and weeds at one end of the shed.

One of these women had a small baby who erupted in tears whenever I stepped into the back yard. He was not accustomed to a person with white skin and blue eyes. I never could make up to him, even after four days.

At the side of the house, near the front, was yet another little hut, the kitchen. Here a fire was kindled daily and food cooked or water boiled in large black pots. In front of the kitchen shed another stick and clay structure extended from the kitchen shed to the wall that separated the house house from the street. Here the women tended to their babies, retreated during the thunder and lightening storms, and some of them slept here at night.

These women had nothing really, except for a few items of clothing for themselves and their children. I did not have the opportunity to ask way they were there, but from conversations with Richard I learned that for one reason or another- perhaps rape and rejection by their “shamed” husband and community, or widowed during the conflicts and evicted from their property by their brother in law, according to customary law-- they had been turned out of their homes and sought refuge in the Wamama Simameni.

I saw or heard no evidence of self-pity. At times I heard joyful singing, and each morning I was greeted with a cheerful smile and a greeting. Juambo, Swahili for good morning.

When class ended Thursday, the usual afternoon thunder and lighting storm had not arrived, giving me an opportunity to talk a walk through the village. Villagers were everywhere, walking along both sides of the road, which was lined with little stands and shops.

While I received a few stares—Caucasians are rare in Lubutu—I received far more smiles and greetings of “Bonjour.” No one asked me for money, and when I wandered through the stalls in the market, if I stopped to examine some bright and oft-times wild fabric, the vendor attempted to persuade me to buy for “votre femme,” but the pressure was not high and the encounter always pleasant.

The people here are kind, gentle and cheerful. They lack leadership from the government, which provides no infrastructure, no presence here and no hope. But now, and for the foreseeable future, any change, any hope, and progress must come from villagers like those of Lubutu.
Posted by blogsome at 11:38 PM