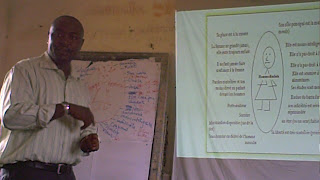 The next time you complain about the hardships of your daily commute, take a moment to think about Richard Malengule’s commute to Punia from Lubutu in Maniema Province, DRC. A typical commute involves 150 to 200 kilometers miles on the back of a moto (a small motorcycle) on muddy trails, where often the water filled ruts swallow the wheels and mud flies up from spinning, slipping and sliding wheels, coating his knee high boots in which he has tucked his slacks.

There are no tolls at the bridges, because there are no bridges across the rivers. At the shore a boatman and his pirogue await to ferry him across a river half a kilometer or more wide. Pirogues can be as short as fifteen or twenty feet, and as long as forty feet or more. Richard’s crossings demand the largest of pirogues, in which the moto, Richard, the moto driver, luggage and the boatman are precariously balanced. Pirogues are simple craft, logs that have been hollowed out, shaped like giant canoes.

Yes, luggage is included in his commute, for this is not a daily but rather a weekly or biweekly routine. Richard frequently motos and pirogues to tiny remote villages, like Punia, isolated in the eastern side of Maniema, accessible in the rainy season only by moto, and in the dry season by four wheel drive vehicles. He may be in Punia for a week or more, working to overcome age old customs and practices that subjugate women and girls to intolerable injustices and hardships.

Not only does Richard bring a new understanding and appreciation for women to the people of these remote villages, he also brings criminals, usually sexual offenders, to justice. He described to me journeys with three on a moto, the driver, the offender, and him, driving through the forest on roads that are not much more than trails, crossing rivers in a pirogue, en route to one of the few courts in the province.

This is particularly dangerous work, for an offender who prefers drowning to prison can easily capsize the pirogue, dumping motos, luggage and people into the swift moving waters.

Richard is a young, dynamic and courageous Congolese attorney who is risking his life in his work to bring the rule of law to the remote province of Maniema, DRC. He works for a gender and justice program funded by the Dutch government and partnered by Heal Africa and the American Bar Association. The program is designed to educate and sensitize the people of Maniema province, a program which struggles to bring equality and respect to women, and to overcome customary law that deprives women not only of property, inheritance and education, but also of equality, dignity and opportunity.

I spent five days with Richard in Lubutu observing him present the Gender and Justice teaching. His days started soon after dawn. Breakfast was a hot cup of Nido, a Nestle fortified powdered milk, and a bun of white bread quite similar to a hot dog bun. The Gender and Justice class started at 8 a.m., in a large classroom at the nearby Catholic school. The young men who assisted in the logistics of the program had already taken the generator to the school, placed it 50 yards from the classroom so its noise would not be heard in the classroom. Electricity made a power point presentation possible.

When we arrived, the men and women, about 100 of them, were already seated and ready for the day’s session to begin. Most were residents of Lubutu and some came from other nearby villages. One of the pastors who was assisting was from Punia, several hours away. He had arrived via moto,legs spattered with mud, after having navigated a half day through the forest on the rain saturated trail. He stayed in the Heal Africa house during the week of classes. After he,or one of the local pastors launched the day’s session with prayer, Richard began his presentation. He lectured for a while,and then presented questions for consideration by the men and women, who were divided into groups to discuss the issues and summarize their discussion and conclusions by writing on large pieces of butcher paper. The paper was taped to the wall, and then one of the group members presented the group's opinions. One topic, for example, asked what contributed to the unequal status accorded to women, or the deprivation of education to girls. Discussions were lively and long, often with some of the more conservative folk, especially one of the pastors who attended, citing Bible verses in support of their belief in the secondary, inferior status of women.

After a lunch of white rice, shredded cassava leaves (similar to spinach in appearance, less so in taste) and a piece of meat, the class continued until 4:30 p.m. Each person received a huge helping of rice, the plates heaped high with rice, a ladle of casava next to it, a piece of meat on top, and the whole works topped with a gravy from the pot of meat.

The sessions ended at 4:30. Upon return to the Heal Africa house, Richard worked until 9 or 10 each night preparing for the next day. Dinner, like breakfast, was Nido and bread.

Richard has a wife and two small children in Goma. He is away from them weeks at a time. His wife is supportive, but she worries about and misses him. Richard is dedicated to his work, a work of risk and sacrifice, but also of rewards: he is helping to change the Congo, to bring women into their rightful place and to end the sex discrimination, sexual violence and subjugation of women.

In short, he is working to stop the wasting of the Congo’s most precious resource, its women.
Posted by blogsome at 11:56 PM