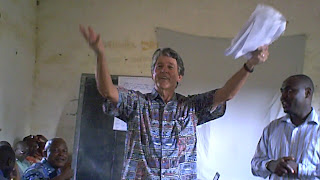 On the last day of the gender and justice seminar in Lubutu, I had the opportunity to speak to the men and women who had faithfully attended the class from the beginning. The prevailing theme of the entire seminar was that men and women must abandon the traditional and customary view of women as lesser beings and allow women to blossom into the full and equal participation in community and domestic life. Accordingly, I prepared a talk about how the Blacks of the U.S. had brought about change in the 60’s and thereafter, utilizing the law, demonstrations, sit-ins, education and above all, perseverance in the quest for equal opportunity and equal treatment.

I had written out my script in French before leaving for Lubutu, and Fabienne, the manager at Maji, had gone over it for me, correcting errors in grammar, syntax and vocabulary. The big day came. I had the same nervous anxiety gnawing at my stomach, but I was accustomed to that feeling from my experiences addressing judges and juries. I knew that as soon as I started, the rhythm would come and all would be well.

All was not well. After about 2 or 3 minutes, the men and women in the rear of the room became restless. It appeared that while those persons in my immediate surroundings could understand my French, but those in the rear of the room simply could not. My French, with a pronounced American accent, was to many of the people like a foreign language. French as spoken in remote Maniema Province has its own idiosyncrasies and pronunciation that would have driven my Parisian native professor of French a bit fou. Richard kindly suggested that I switch to English and he would translate. That was a very good idea. I started over and the talk proceeded smoothly and the audience appeared to be very attentive.

Always seeking a laugh, I deviated from my script and inserted a bit of my own domestic life into the talk.

“I have been in the Congo already four weeks on this trip and two weeks last year. Here in this room I see many strong and able bodied men. But men, do you know what? In the six weeks I have spent in the Congo, I have never, never seen a man walking along the road carrying firewood. Women and children, but never men. I have never seen men carrying those heavy yellow water cans. What do you have to fear?

“When I retired, my wife continued to work. She still works. So one day after I had spent the day golfing, or lying in the sun, or reading and loafing, she came home and said to me, ‘you know Kerry, now that you are not working perhaps you could fix dinner and do the laundry and other of the household chores.’ She was right. There was no reason I should not help out. It was only fair.

“So now I cook dinner three or four nights a week and I do the laundry, do the grocery shopping and other chores around the house. Look at me men, look at me. I am still a man! I do not wear dresses. I still wear pants! I am still a man.!”

Many of the women clapped and cheered. And many of the men had sheepish grins on their faces.

I ended my talk with a reference to Barack Obama’s campaign slogan, “Yes we can.” I said something to the effect of “I know you can change, that you can abandon old discriminatory ways. I am going to ask you if you can, and I want the people clear over in Punia to be able to hear you.”

“Pouvez-vous?” [Can you?] I yelled. In reply there was a resounding,